Yes, it’s finally here. One and half year after Tom Callaway, Engineering Manager @ Red Hat added the patch to Chromium we also get hardware accelerated video playback for Firefox. It’s shame it took too long but I’m still learning.

The VA-API support in Firefox is a bit specific as it works under Wayland only right now. There isn’t any technical reason for that, I just don’t have enough time to implement it for X11 so Bug 1619523 is waiting for brave hackers.

The contributor list is not exhaustive as I mentioned only the most active ones who comes to mind right now. There are a lot of people who contribute to Firefox/Wayland. You’re the best!

How to enable it in Fedora?

When you run Gnome Wayland session on Fedora you get Firefox with Wayland backend by default. Make sure you have the latest Firefox 77.0 for Fedora 32 / Fedora 31.

You also need working VA-API acceleration and ffmpeg (valib) packages. They are provided by RPM Fusion repository. Enable it and install ffmpeg, libva and libva-utils.

AMD open source drivers decode video with radeonsi_drv_video.so library which is provided by mesa-dri-drivers package and it comes with Fedora by default.

I have no idea how NVIDIA cards are supported because I don’t owny any. Please refer to Fedora VA-API page for details.

When you have the driver set it’s time to prove it. Run vainfo on terminal and check which media formats are decoded on the hardware. 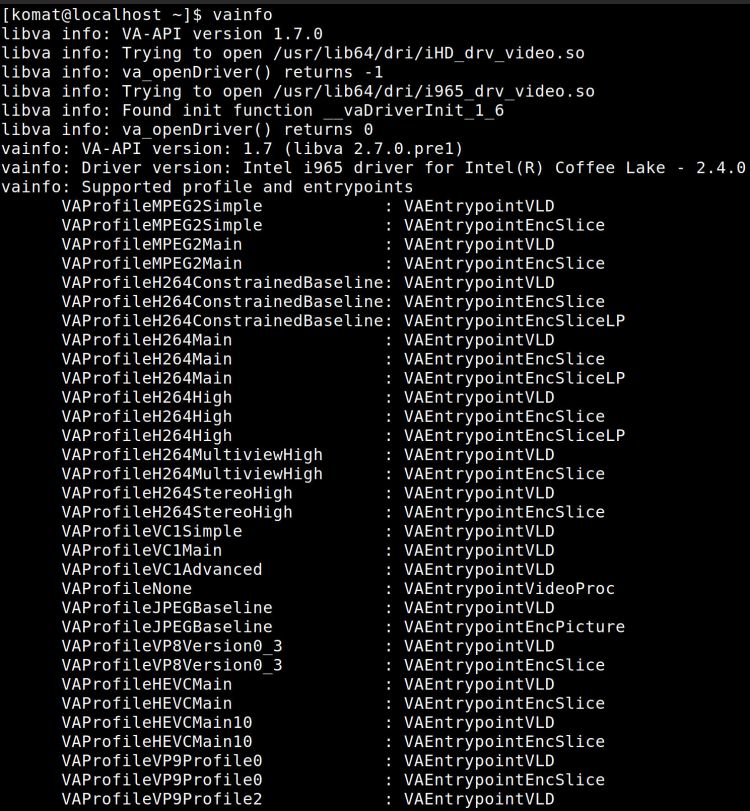 There’s vainfo output from my laptop with integrated Intel UHD Graphics 630. Loads i965_drv_video.so driver and decodes H.264/VP8/VP9 video formats. I don’t expect much more from it – seems to be up.

It’s time to whip up the lazy fox 🙂 At about:config set gfx.webrender.enabled and widget.wayland-dmabuf-vaapi.enabled. Restart browser, go to about:support and make sure WebRender is enabled…

…and Window Protocol is Wayland/drm.

Right now you should be able to decode and play clips on your graphics cards only without any CPU interaction.

VA-API video playback may not work from various reason. Incompatible video codec, large video size, missing system libraries and so on. All those errors can be diagnosed by Firefox media log. Run on terminal 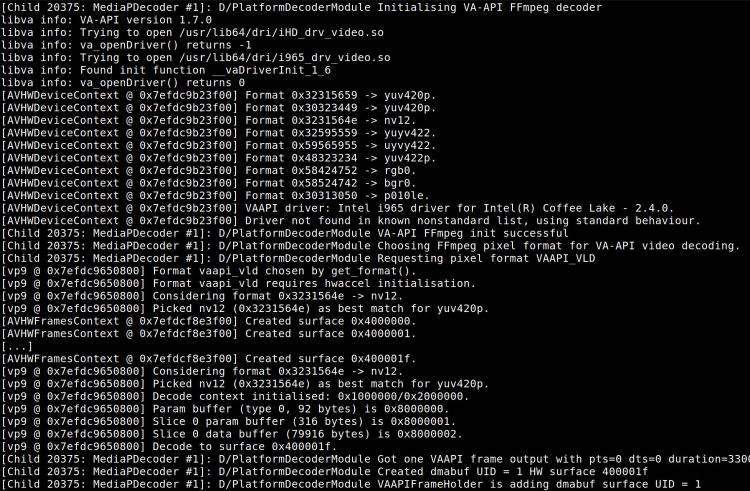 “VA-API FFmpeg init successful” claims the VA-API is up and running, VP9 is the video format and “Got one VAAPI frame output…” line confirms that frame decoding works.

Youtube video codec can be changed by enhanced-h264ify Firefox add-on, so disable all SW decoded formats there. And that’s it. If you’re running Fedora you should be settled for now.

Stock Mozilla Firefox 77.0 is missing some important stability/performance VA-API fixes which hit Firefox 78.0 and are backported to Fedora Firefox package. You should grab latest nightly binaries or Developer/Beta versions and run them under Wayland as

Mozilla binaries perform VP8/VP9 decoding by bundled libvpx library which is missing VA-API decode path. If your hardware supports it and you want to use VA-API for VP8/VP9 decoding, you need to disable bundled libvpx and force external ffmpeg. Go to about:config and set media.ffvpx.enabled to false. Fedora sets that by default when VA-API is enabled.

53 thoughts on “Firefox on Fedora finally gets VA-API on Wayland.”

This site uses Akismet to reduce spam. Learn how your comment data is processed.